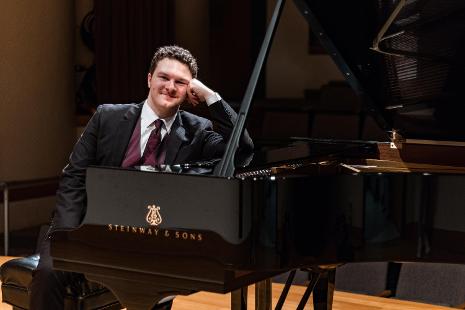 Aaron Petit, 22, is an American pianist and composer who currently studies with Santiago Rodriguez at the University of Miami: Frost School of Music and Mark Westcott in Portland, Oregon. Having no previous musical instruction, he started learning to play the piano at age 12. His impersonations of Mozart, Beethoven, Chopin and Victor Borge developed his deep interest for the classical composers and repertoire during the first two years of his study.

In the last 5 years, Aaron has won 8 piano competitions in the US including the Gershwin International Music Competition in NYC, the Seattle Philharmonic Don Bushell Concerto Competition (runner-up), Metro Arts Van Buren Concerto Competition, and the Portland Young Pianists Festival Competition. He has performed with orchestras in Seattle, Portland, Salem, Renton, and Puyallup since making his debut at age 15 with Prokofiev’s Piano Concerto No. 1. In the 2016-17 season, he performed Chopin's e minor Piano Concerto with musicians of the Oregon Symphony and Oregon Ballet Theater Orchestras with Maestro Niel DePonte.

Aaron's schooling has included Seattle Conservatory of Music and the Colburn School: Young Artists Academy in Los Angeles. His previous teachers included international concert pianists, Mark Salman in Seattle, Washington and Peter Brownlee in Bend, Oregon. An avid teacher himself, Aaron has taught over 35 full time students over the years as well as given masterclasses throughout the NW United States.

As a composer, Aaron's work for a 5-part chamber ensemble was premiered in October 2018 at the University of Miami. He was commissioned to write the main theme for Luminescence, an indy video game which was featured at the the Portland Retro Gaming Expo that same month. His new work for chamber orchestra will be performed and debuted this upcoming April at the university of Miami. His long term ambition is to help the general public relate to classical music and share the love he has for the arts through teaching, composing, and performing.

Bob Coulon has been passionate about teaching piano and giving students the tools they need to excel in music since 1990. That’s 26 years of experience teaching young and old, at all levels!  He attended Temple University for Music Education and expanded his studies under renowned jazz musician and educator Jimmie Amadie.  Bob has worked professionally as a keyboardist with various bands around the country since the 70’s and is currently a member of the Dane Anthony Band. Mr.C, as his students like to call him, has also been the Music Director of the praise band at the United Methodist Church of Absecon since 1999.

His lessons focus on note reading, rhythm, harmony and music theory. Students at the beginner level are methodically guided using the Alfred’s and Bastein series. At the intermediate and advanced levels, students have the opportunity to study famous classical pieces, giving them the technique necessary to perform the rhythmically challenging popular music of today. Over the years Bob has created a large catalogue of personalized piano arrangements that are only available to his students. He believes that teaching in a positive and friendly environment allows students to enjoy piano while learning the skills they need to become successful and dynamic students of music.